While there are a tremendous amount of bodybuilding gains that can be derived from anabolic-androgenic steroid (AAS) use, there is also the danger of abuse. Abuse of Anabolic steroids is not uncommon in inexperienced bodybuilders and those that DO NOT seek advice from the right source.

Abuse may also be triggered by the use of adulterated anabolic steroids for sale. Imagine buying steroids that have been laced with psychoactive, narcotic compounds. Blackmarket dealers are known to adulterate their products in order to make a profit. They add addictive compounds to keep their clients coming back for more fake steroids.

This is why you should always purchase your AASs from trustworthy dealers. PharmaHub is a trustworthy and reliable online AAS supplier. We provide 100% pharma grade steroid products manufactured by world renowned pharmaceutical companies.

This guide highlights the origins of AAS, why and how people use steroids, and their possible side effects. You will also learn what post-cycle therapy or PCT is and why it is important to any anabolic steroid cycle.

What is Anabolic Androgenic Steroid?

The human bodily functions are controlled by hormones released by various organs in the body. Testosterone is one vital hormone that is responsible for male sexual health, weight gain, and muscle development. This hormone is produced in greater amounts by the testicles, but in minute amounts by the adrenal gland and ovaries in females.

The reason why the mention of natural testosterone is so important, is because most AASs are derivatives of testosterone. Androgenic-anabolic steroids are synthetically designed to mimic the anabolic and androgenic properties of endogenous testosterone.

While AASs were initially created way back in the early 20th century for medical science, their bodybuilding and performance-enhancing benefits have since been exploited by athletes. In the field of medicine, AAS has been used in treating many ailments including catabolic disorders, such as; HIV/AIDS and cancer.

However, it is in the world of bodybuilding that AASs would gain more recognition. Since the 1950s, AASs have been used by athletes to enhance their performance in competitive sporting events.

Anabolic-androgenic steroids will promote weight gain which is necessary in sports like bodybuilding, powerlifting, and weightlifting. AASs are also known to boost energy, power, agility, strength, aggression, stamina, and endurance.

In addition, androgenic-anabolic steroids help to increase metabolism, induce the shedding of body fat, and promote weight loss. Bodybuilders make use of AASs before, during, and after competition. Steroids are also used to maintain muscle building gains and prevent weight gain when athletes are in their off-season.

Who Uses AASs & Why are they used?

What are the Origin & Qualities of Anabolic Steroid

The first recorded creation of anabolic steroids was way back in the early to mid 1930s. Back then a Marburg chemist known as Adolf Butenandt isolated the gonadal steroid (androstenone) from urine. However, by 1934 androstenone was synthesized by a chemist from Zurich known as Leopold Ružička.

By the 1940s, the then Soviet Union and Eastern bloc nations like East Germany were heavily involved in the development of synthesized anabolic steroids. These steroids were experimental and used by their athletes in international sporting events like the Olympic games. At the time, East German and Soviet Union athletes were winning just about every gold medal at the games.

This led a physician attached to the U.S Olympic team named John Ziegler to develop methandrostenolone with the help of a synthetic chemist. Methandrostenolone was then marketed as Dianabol by Ciba
Pharmaceuticals after the Federal Drug Administration (FDA) approved steroid use in 1958.

The anabolic effects of steroid use include:

How are Anabolic Steroids used?

An anabolic steroid may be taken alone or in combination with other anabolic steroids. To avoid the abuse of anabolic steroids, steroid users take predetermined dosages of AASs over a specific length of time called a “cycle”. Wise users take a break after a steroid cycle to allow their bodies to recover before their next cycle.

After running a steroid cycle, you need to restore normalcy to your natural hormones. Also, some steroids are known to aromatize and convert into the predominantly female hormone known as estrogen.

When your estrogen levels are exceedingly higher than normal, you are more than likely to experience feminization side effects like gynecomastia. PCT with the use of anti-estrogen medications, such as: Clomid, Nolvadex, Arimidex, and Proviron, will help reduce your estrogen levels.

PCT is a vital part of every steroid cycle and should be implemented before a subsequent cycle. The abuse of anabolic steroids can severely disrupt your normal hormonal levels and cause you to experience severe side effects. If you do not practice PCT after an initial cycle and before the start of your next cycle, it can be considered as a form of steroid abuse.

What are AAS Side Effects?

The side effects experienced from using anabolic-androgenic steroids vary from individual to individual. The severity of steroid side effects are influenced by many factors, some of which include:

The abuse of anabolic steroids is a major factor for increased side effects in steroid users. Some of the common side effects associated with steroid use in both men and women include:

Side effects can be minimized or out rightly avoided if steroid users have a comprehensive medical checkup prior to running a steroid cycle. By diligently complying with cycles and doses recommended by qualified bodybuilding trainers, you will be able to avoid steroid side effects. Misusing or deliberately abusing steroids will only increase your susceptibility to side effects and can lead to organ damage or even death.

You can buy quality anabolic steroids online today from PharmaHub. PharmaHub offers over 1,00 different types of pharma grade anabolic steroid products. If you want to start your first steroid cycle, you can chat with IFBB certified pros on our platform.

These professional trainers will provide you with free coaching on what steroids to buy and how you should use the steroids. PharmaHub will also deliver all orders fast in a secure and discreet package to any location in the U.S and overseas.

VOTE FOR US AND GET REWARDS! 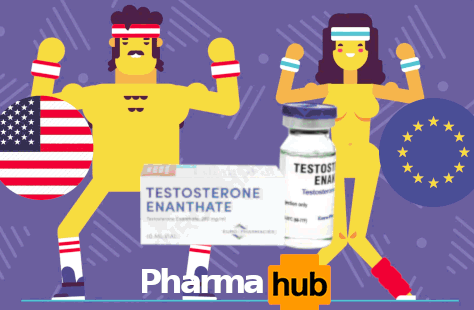 EUROPHARMA AVILABLE TO USA AND EUROPE!